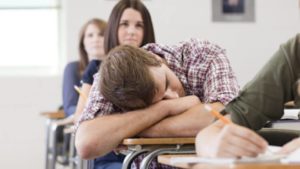 When Meredith Henry began working at the University of New Brunswick in Saint John in 2006, she could counsel a student within a day or two.

Now, students are waiting up to six weeks to see Henry, one of two counselling therapists on campus.

“I’ve noticed a huge difference in students wanting to seek help, and be willing to come to counselling as part of their path to wellness,” Henry said. “We can’t keep up with the demand.”

They’re losing sleep, and in more extreme cases, missing classes and dropping out.

“They’re worried about jobs, what options are available to them when they finish school, about, what am I going to do with [this degree] and how is it going to support me for the life I have in mind,” said Henry.

“They’re working full-time jobs. We have older students, or students who are single parents and have a lot of responsibilities outside of school, so they’re under a lot of pressure.”

Earlier this month, Henry joined educational counsellors from across Atlantic Canada for a two-day workshop in Saint John on single-session therapy, which supporters say could ease the caseload.