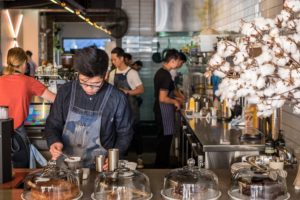 That post-secondary students in B.C. work more and owe more in loans comes as no surprise to Caitlin McCutchen.

The Kwantlen University student who’s in year 5, part-time, of her degree, worked two jobs while studying for what was nominally a four-year degree: every week, she pulled three eight-hour evening shifts at a café and sometimes a graveyard shift or two as a care aide at a seniors home on weekends.

“It definitely tires you out,” said McCutchen, 29. “There’s definitely extra stress. It puts so much pressure on you” to meet rent and living expenses.

She isn’t a rarity. Moonlighting by students has become more common. Almost two-thirds, 64 per cent, of B.C. post-secondary students worked while at school in 2015, compared to 59 per cent nationally, according to a survey called Earning While Learning by Vancity.

And that had repercussions on academic performance, said Sophie Salcito, a Vancity financial planner…