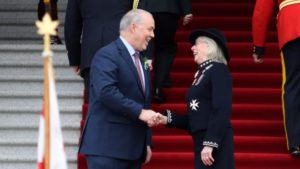 A new session of B.C.’s legislature opened on Tuesday with a throne speech highlighting the new NDP government’s accomplishments in its first seven months in power, while pointing the way to the policies it hopes to move forward on over the next several months.

“This session, B.C. will move in a new direction, with new investments in people and new opportunities for the future,” said Lt.-Gov. Judith Guichon in the legislative chamber.

“Government will take steps to address the challenges facing families today and put people first, regardless of who they are or where they live.”

New, detailed policies on those measures weren’t addressed in Guichon’s throne speech, which served as a preview of the upcoming budget, scheduled for next Tuesday.

But she said the government would be moving forward on a number of issues this session, including: