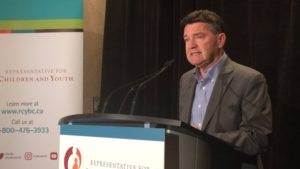 Following an investigation into the death of a B.C. teenager who took his own life, Bernard Richard is calling on the new Ministry of Mental Health and Addictions to improve mental health services for children and youth.

The 17-year-old, referred to in the youth adovcate’s report as Joshua, had been staying at B.C. Children’s Hospital for four months when he ended his life in 2015.

His family sought help from the Ministry of Children and Family Development, but Richard says he he didn’t receive appropriate early intervention and in the years that followed his mental health deteriorated.

Joshua attempted to take his own life several times, according to the report.

At the time of his death, the investigation found Joshua was languishing in hospital because his caregivers could not find a safe placement in the community.

Now, Richard is calling on the province’s newest ministry, Mental Health and Addictions, to implement a “full continuum of mental health services” for children and youth in the province.