Glenn Close and Patrick Kennedy on the weight of mental illness 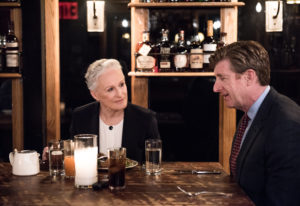 Glenn Close does not read her reviews. So the jumbo excerpt on the marquee where she is reprising her Tony Award-winning role in “Sunset Boulevard” (“One of the great stage performances of this century”), surrounded by flashing lights, may be a spoiler.

“You still have to go out the next night no matter what they write,” she said. Still, the actress, 69, who has won three Tony Awards and three Emmy Awards, and has been nominated for six Academy Awards for her work in films such as “Fatal Attraction,” “Dangerous Liaisons” and “Albert Nobbs,” would seem to have little to fear.

“But you work so tightly with people in theater,” she said. “Even if they say wonderful things about me, but something unkind about my incredible collaborators, that would be just as upsetting.”

That group ethos is also the essence of addiction recovery, according to Patrick Kennedy, who represented Rhode Island in Congress for eight terms before retiring from office in 2011. He subsequently founded the Kennedy Forum for equality in the treatment and insurance coverage of mental illness and addiction.

“When you are emotionally connected to your peers in recovery,” he said, “you stand the best chance of being protected from the compulsion to use and do things that get you into trouble with your illness.”