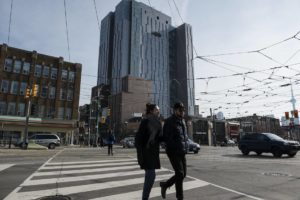 Alan Perlis is promising to show off what he calls the most popular room in the 25-storey student residence tower his real estate development company recently opened near the University of Toronto.

He has already given a tour of a spacious cafeteria, a penthouse lounge with panoramic views of the city, several video game rooms, a table-tennis room, even an arts and crafts space. What could be left?

He swipes his security card and opens the door to a small room containing bins of colourful toy building bricks, similar to Lego. One wall is covered with the green plastic base material, allowing students to spell out words on the wall in bricks.

It’s called a “maker space,” Mr. Perlis explains, and Knightstone Capital Management Inc. also built a similar room in another residence building it constructed on Centennial College’s campus on the east side of Toronto in Scarborough.

“You show up some mornings and there are some funny things written on the walls,” he adds.

Knightstone’s CampusOne building at 255 College Street in Toronto, which houses 890 students, is a far cry from the 1960s-era buildings that have been the backbone of student housing on many Canadian campuses for decades.

Growing global competition to attract students and demanding tastes among the current generation have created an opening for private-sector developers to move into student-residence construction as builders and investors look for less-competitive, untapped niches in the highly competitive real estate market. The shift capitalizes on the increasing willingness of students – or their boomer parents – to pay healthy rents for higher-end residences with every sort of amenity.

A standard room in the CampusOne building in downtown Toronto costs about $1,700 a month, not including the meal plan. But gone are the painted cinder-block walls and lineups for showers down the hall. Instead, today’s students get condominium-quality units, high-speed WiFi, fitness and games rooms and a host of programming from yoga classes to animal-petting events.