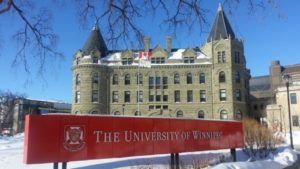 A new partnership between Indspire and The University of Winnipeg will help 80 First Nations, Métis and Inuit students in the coming year through the creation of a new award, geared specifically to those with demonstrated financial need. The University of Winnipeg/Indspire Indigenous Awards Program will provide each selected student with an award of $4,400. It is open to both undergraduate and graduate students.

The new $352,000 University of Winnipeg/Indspire Indigenous Awards Program, administered by Indspire, is possible because of assertive fundraising efforts and is cost-shared by UWinnipeg with matching funds from the Government of Canada. A report released by Indspire in February 2015 showed that 93% of Indigenous students surveyed who received funding from Indspire for their education graduated, and 82% of respondents are employed.

Approximately 12% of incoming students at UWinnipeg self-identify as Indigenous, one of the highest participation rates among Canadian universities.

“I am delighted The University of Winnipeg has shown its leadership and willingness to meet a critical need – the educational advancement of First Nation, Inuit and Métis students.  Research shows that a lack of funding is a key impediment for Indigenous students who are striving to complete their post-secondary education,” said Roberta Jamieson, President and CEO of Indspire. “This contribution highlights UWinnipeg’s commitment to ensuring First Nation, Inuit, and Métis students are obtaining the academic credentials they need to realize their full potential and achieve their dreams.”