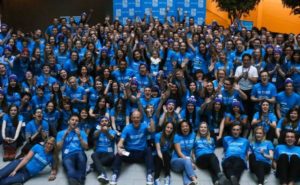 Davonna Kasook, 21, will be attending the 5th annual Jack Summit in March

Davonna Kasook was going through her emails at the beginning of the year when one caught her eye. It was about Jack Summit, a three-day program for youth leaders, aged 18 to 24, who want help end stigma around mental health and bring change to their communities.

“I went through my own issues with mental health and had quite the battle,” says the 21-year-old student at Inuvik’s Aurora College campus. “I thought if I have the power to change my own life then I must have something in there to help other people.”

Kasook submitted her application and found out about a month later that she was one of 200 youth from across Canada selected to attend the summit in Toronto.

Kasook, who wants to become a teacher, knows how hard it is to fight mental illness.

“I think this started when I first started getting bullied in elementary school. I think the first time that I ever thought about suicide, I must have been in Grade 6. So it was a constant battle with myself for many years.”

Kasook said she also experienced anxiety attacks and depression, and as she got older she turned to alcohol and drugs to cope.

It wasn’t until one night when she was brought to the hospital after her ex-boyfriend called the police out of fear that she would commit suicide, that she became aware of the resources she could access.