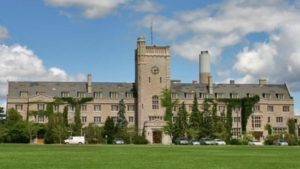 Students in residence at the University of Guelph shouldn’t be surprised if the president of the school knocks on their door starting Monday.

That’s because president Franco Vaccarino along with other administrators, faculty members and counsellors will be making house calls to check on the mental well-being of students.

It’s a follow-up to a program the university ran in the winter semester earlier this year after reports four students died by suicide at the school.

Patrick Kelly oversees the housecalls program. He told CBC it received a positive response in the winter by those knocking on doors and the students.

“We had some students who had faculty visit and they said, ‘it’s nice to know that I’m one of 300 in that lecture, but that individual made time to come through so now I know that they’re approachable and they care about me and it’s not just their job that they’re doing, that they are taking some of their own time to come visit,'” Kelly told CBC News.

He said there were a couple of great stories that came out of the winter term door knocking. One was that Vaccarino sat down with a student and jammed on a guitar for a while. In another visit, a professor just happened upon a group of his own students working on a project for his class. The professor sat down with the students and they just talked.