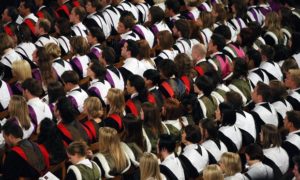 The number of students to drop out of university with mental health problems has more than trebled in recent years, official figures show.

Data from the Higher Education Statistics Agency (Hesa) revealed that a record 1,180 students who experienced mental health problems left university early in 2014-15, the most recent year in which data was available. It represents a 210% increase from 380 in 2009-10.

The figures have prompted charities, counsellors and health experts to urge higher education institutions to ensure the right support is in place.

Norman Lamb, a former health minister, said there was “a crisis on campus with respect to students’ mental health. Counselling provision should be a priority so that all students can access effective support for problems like anxiety, but we know that these services are too often underfunded.”

Dominique Thompson, a student health GP, said she feared students could be leaving early as they struggled to cope with the gulf between school teaching and university education. She said this may be “compounding the recognised increase in mental health issues we are seeing”.

Data obtained by the Guardian from universities through freedom of information requests reflected a similar trend to the Hesa figures, showing the numbers requesting counselling had risen by a third in the last three years.