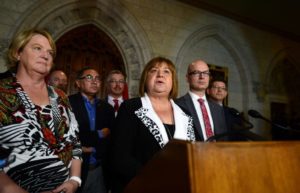 A House of Commons committee looking at the issue of Indigenous suicide is urging the federal government to make sure Indigenous communities have resources available after hours and on weekends — often when emergencies occur.

The report released Monday included a total of 28 recommendations — work that flowed from a 2016 motion to examine and report on suicide among Indigenous people and communities across the country.

During its study, the committee heard from over 50 Indigenous youth representatives, First Nations, Inuit and Métis leaders, academics and health organizations.

MPs on the committee say the witnesses — including many young people — shared difficult personal stories of suicide, while also expressing hope that mental health issues within Indigenous communities could be addressed.

“We had a father who lost his son who came to our committee and bravely shared his story,” McLeod said.

“We were sitting in Vancouver . . . and we heard from a young girl about her assault at the hands of someone she knew in her community.”

The committee report also said witnesses highlighted how intergenerational trauma is a factor in the suicide crisis.