Professor Santa J. Ono at SUMMIT 2017: Professor Ono shared his story in full for the first time, and how it has shaped his leadership. “I learned the hard way the importance of balance and support,” said the 15th President and Vice-Chancellor of the University of British Columbia (UBC). As such, Professor Ono is now committed to an integrated approach that promotes and protects the well-being of the UBC community. By championing the Okanagan Charter—a framework established in 2015 to guide post-secondary institutions in health promotion—Professor Ono seeks to embed well-being into every aspect of campus culture. He believes that students, when given the right tools, can thrive. 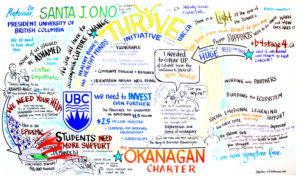