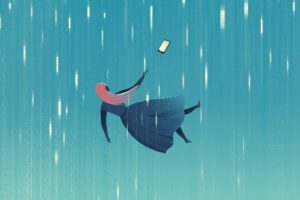 More comfortable online than out partying, post-Millennials are safer, physically, than adolescents have ever been. But they’re on the brink of a mental health crisis.

I’ve been researching generational differences for 25 years, starting when I was a 22-year-old doctoral student in psychology. Typically, the characteristics that come to define a generation appear gradually, and along a continuum. Beliefs and behaviors that were already rising simply continue to do so. Millennials, for instance, are a highly individualistic generation, but individualism had been increasing since the Baby Boomers turned on, tuned in, and dropped out. I had grown accustomed to line graphs of trends that looked like modest hills and valleys. Then I began studying Athena’s generation.

Around 2012, I noticed abrupt shifts in teen behaviors and emotional states. The gentle slopes of the line graphs became steep mountains and sheer cliffs, and many of the distinctive characteristics of the Millennial generation began to disappear. In all my analyses of generational data—some reaching back to the 1930s—I had never seen anything like it.

At first I presumed these might be blips, but the trends persisted, across several years and a series of national surveys. The changes weren’t just in degree, but in kind. The biggest difference between the Millennials and their predecessors was in how they viewed the world; teens today differ from the Millennials not just in their views but in how they spend their time. The experiences they have every day are radically different from those of the generation that came of age just a few years before them.

What happened in 2012 to cause such dramatic shifts in behavior? It was after the Great Recession, which officially lasted from 2007 to 2009 and had a starker effect on Millennials trying to find a place in a sputtering economy. But it was exactly the moment when the proportion of Americans who owned a smartphone surpassed 50 percent.