Study finds surprising relationship between moderate substance use and grades 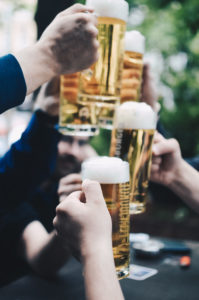 A new study out of Yale University confirms a notion college and university administrators have held for years — that substance abuse is linked to a decline in student grades — but this study also reveals a number of trends among college students that surprised its authors.

The study tracked more than 1,100 students at two unnamed colleges in Connecticut over the course of two years, beginning with their first semester of freshman year. The students involved in the study answered a series of questions about their patterns of substance use every month.

To the authors’ surprise, very few students reported using marijuana while abstaining from alcohol — so few, in fact, that they could not draw conclusions about that subgroup of students.

The researchers found that although the 1,100 students achieved comparable SAT scores, their academic performance varied greatly in college. Students who drank minimal alcohol and used minimal marijuana had an average GPA of 3.10, while those who drank alcohol earned an average GPA of 3.03. The most dramatic change occurred in students who used both alcohol and marijuana — their GPAs averaged 2.66.