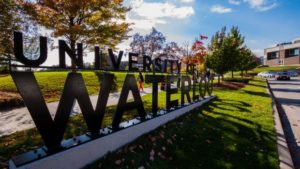 30Students at the University of Waterloo say they want to see better mental health supports at their school, following the second suicide on campus in less than three months.

“I just felt that two in one term is two too many,” Nikki St. Clair, a student who started a petition calling for change, said in an interview.

“I couldn’t just sit there and let this continue to happen.”

In January, a student suicide involving chemicals brought Waterloo Fire’s hazmat unit to one of the buildings in one of the UW Place residence.

On Monday, March 20, a 19-year-old male student was found dead outside the same building.

Waterloo student Julie Nguyen says the first suicide affected her to the point where she sought out counselling services from the school.

She says she was told she would be put on a wait list and would likely have to go a few weeks before getting an appointment – which left her feeling disappointed.

It wasn’t until last week, after she had sought out private treatment, that she actually heard back from the school’s counselling office.

“In two months, they didn’t come and see me,” she said.

“I kind of thought they forgot about me.”

Last week – before the latest suicide – Nguyen posted on Facebook about her experience. Almost immediately, she started hearing from other students in similar situations.