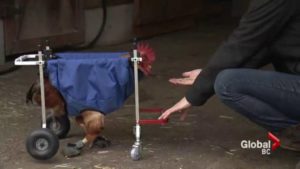 Louise is anything but a conventional therapy animal for at-risk children. In fact, everything about Louise is a contradiction because Louise is a rooster.

He’s a rooster with a deformed leg and to help with the plucky bird’s quality of life, he’s been outfitted with a custom-made avian wheelchair.

Louise’s luck started early. As a one-day-old chick, Louise was misidentified as a hen and spared from being sent to the grinder with all the other baby roosters. Instead, he and his brother were shipped off to a local farmer with 48 other chicks.

But as chicks, Louise and his brother had badly deformed legs; which was either due to a congenital condition or being injured when transported and couldn’t compete for food. Although the pair was scheduled to be killed, the farmer’s kids took pity on them and asked the Semiahmoo Animal League Inc. (SALI) farm in South Surrey to adopt the siblings.