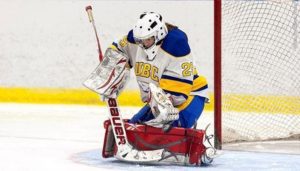 On Friday, January 6, the UBC Thunderbirds held a pre-game ceremony in honour of goaltender Laura Taylor while raising awareness about mental illness.

Last April, Taylor passed away a few days shy of her 34th birthday, after struggling with bipolar disorder and depression. At the ceremony, Taylor’s jersey number—29—was retired in front of family, friends, and a supportive crowd.

Taylor had been a new addition to the squad, studying at UBC’s faculty of medicine after transferring from the University of Saskatchewan in 2015. The 33-year-old student had wanted to be a role model and mentor for her fellow teammates. She also had a contagious smile and was vocal about mental health issues.

The events had a deep impact on her family and friends, as well as her teammates. But in its wake, it also sparked a campus-wide conversation about mental health, a conversation that needs to happen. A large part of the discussion has centred around removing the stigma surrounding mental health and wellness conversations.