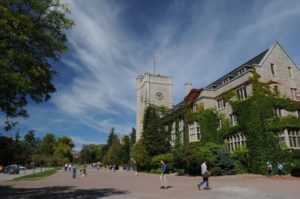 Four University of Guelph students have taken their own lives since September 2016.

It is the highest number of student suicides the school has ever seen in a single academic year.

The string of tragedies has generated serious concern in the student body about the quality and availability of mental health care on campus.

An online petitioned, calling for “change and transparency” in the school’s mental health services received more than 2,800 signatures within two weeks.

School officials and mental health experts say universities cannot be the sole source of help. They need the support and partnership of outside care providers to adequately meet the growing demand for mental health services amongst students.

Taryn MacDonald, a student at Guelph, suffered from anxiety during high school and had small panic attacks when facing tests. She managed her anxiety with antidepressants. But things changed when she went to university, she said. There was more pressure to succeed and more competition from other students.

“Suddenly, we are at university and aren’t the top of our class anymore. We’re not the best player on our team. We can’t land executive positions on clubs like we used to,” MacDonald said. “At university, some of us are isolated from our families, our closest friends, pets, and other confidantes like teachers and coaches who previously helped silence the doubts,” she added. “No one who knows us well enough is there to tell us that maybe we aren’t acting like our usual selves, or that we seem sadder than usual.”