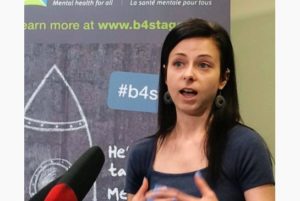 British Columbia needs to improve its mental health supports for teenagers, particularly in schools, according to four in five participants in a three-week mental health survey.

On the question of which demographic of the population should be prioritized for interventions, 80 per cent chose adolescents. And schools were listed as the most important choice of screening location, garnering a full half of responses.

“I’m not surprised, because we know youth are a high-risk group,” explained CEO Bev Gutray in a phone interview. “But if we can get to them early, and they can get mental health care early on, many can recover fully.

“Unattended mental illnesses, however, often end up continue into adulthood. Why don’t we do that work early on?”

At the campaign’s launch last October, held in CMHA’s Vancouver offices, 25-year-old M.J. Ziemann spoke out about her struggle since she was a teenager with mental health issues.

“I had actually applied for help,” she told Metro in an interview at the time. “It wasn’t until I was very, very, very ill and needed to be hospitalized that the wheels got turning.”