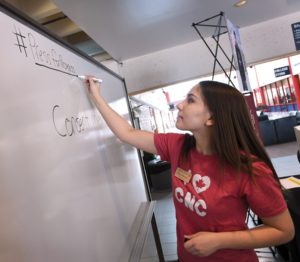 The administration of the College of New Caledonia hope a recently launched campaign will get students talking about sexual assault and consent.

On Thursday, staff at CNC launched the Red Phone Project, a campaign to inform students about the on-campus supports that exist for students who may have experienced sexual assault.

The campus now has a procedure in place for a college-lead investigation, should a student report an incidence of a sexual assault on campus, and also has trained mental health staff on campus to assist students.

The campaign was initiated to draw attention to CNC’s student sexual misconduct policy. The policy was initially passed by the college’s board of governors in May of last year, and establishes provisions for disclosure, complaints and reports of sexual assault.

Students who disclose a sexual assault to a health professional or another staff member of the college are entitled to academic accommodation.

A student who makes a formal complaint will invoke an investigation by staff of the college, who will also seek to provide “clear, appropriate and fair processes for handling complaints of sexual misconduct,” according to the policy.

A student who is accused of sexual assault will be given notice of the allegations, and will be provided with an opportunity to respond.