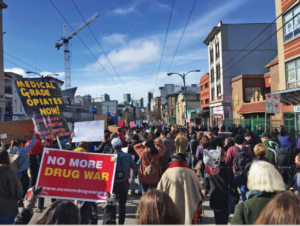 With the ongoing opioid crisis and the imminent legalization of cannabis, a timely new book looks at the history of Canadian drug prohibition and traces how policies made decades ago relate to today’s issues.

In Busted: An Illustrated History of Drug Prohibition in Canada, Susan Boyd shows how the country’s drug policies evolved with reproduced drawings, paintings, photographs, film stills and official documents dating back to the 1700s.

“I wanted to create a visually compelling book that would be accessible but grounded in history,” Boyd told CBC host of The Early Edition Stephen Quinn.

Boyd, who is also a professor in the faculty of human and social development at the University of Victoria, has written several books about drugs in the past.

This book, she said, takes a different approach.

“We’ve criminalized [certain substances] and it’s had devastating consequences leading us to this drug overdose crisis across Canada,” she said.

Busted tells the history of prohibition but also the stories of resistance against prohibition.

“Putting people in prison doesn’t do anything to help them with problematic drug use or dependency,” Boyd said.