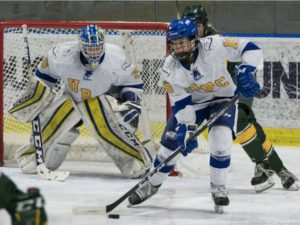 As tributes go, Mikayla Ogrodniczuk’s for Laura Taylor is a powerful one, in that it can kick off conversations that many of us have difficulty starting.

Ogrodniczuk, who plays defence on the University of B.C. women’s hockey team, has spearheaded the development of the UBC Thunderbirds Mental Health Hub, a website designed to help athletes in particular find resources to deal with depression and other similar issues.

Taylor was a goalie on her team. She took her own life just days before her 34th birthday. Most of the UBC players found out afterwards that Taylor, a medical student, had been living with bipolar disorder and depression.

“It took a long time to come to terms with it,” said Ogrodniczuk. “As an athlete, it’s never something you think about — your teammate will be sitting in her stall beside you one day and then not the next. Then it took me a while to come up with an idea that I thought would be impactful.